Maggots are fly larvae and have proven to be of huge benefit to science with their use in the medical and other fields. However, in a home or business environment, a large quantity of maggots is a sure sign of a dramatic increase in flies in the near future.

Flies help to clean up the natural environment. However in a home or business environment, they can become a huge nuisance and are not the cleanest of insects. They often sit on unhygienic surfaces, from doggy doo to dead animals and can easily spread germs and bacteria to your immediate environment. They also have a tendency to vomit on food to help with their digestive process. Having flies on your food is definitely not something you want. Flies can become a major pest in and around areas where food, water, shelter and other contributing factors like manures or fertilizers can be found. They are often prevalent in and around agricultural or lifestyle areas such as farms, stable yards etc. Managing your contribution to the fly population can save you serious inconveniences and health concerns for you, your neighbours and those operating in your immediate environment. 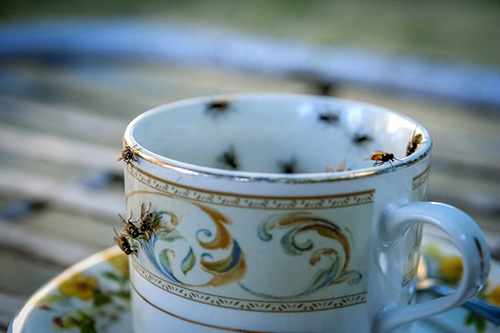 Flies: True flies are insects of the order Diptera, the name being derived from the Greek δι- di- “two”, and πτερόν pteron “wings”. Insects of this order use only a single pair of wings to fly, the hindwings being reduced to club-like balancing organs known as halteres. Diptera is a large order containing an estimated 1,000,000 species including horse-flies, crane flies, hoverflies and others, although only about 125,000 species have been described.

Flies have a mobile head, with a pair of large compound eyes, and mouthparts designed for piercing and sucking (mosquitoes, black flies and robber flies), or for lapping and sucking in the other groups. Their wing arrangement gives them great manoeuvrability in flight, and claws and pads on their feet enable them to cling to smooth surfaces. Flies undergo complete metamorphosis; the eggs are laid on the larval food-source and the larvae, which lack true limbs, develop in a protected environment, often inside their source of their food. The pupa is a tough capsule from which the adult emerges when ready to do so; flies mostly have short lives as adults.

Diptera is one of the major insect orders and are of considerable ecological and human importance. Flies are important pollinators, second only to the bees and their Hymenopteran relatives. Flies may have been among the evolutionarily earliest pollinators responsible for early plant pollination. Fruit flies are used as model organisms in research, but less benignly, mosquitoes are vectors for malaria, dengue, West Nile fever, yellow fever, encephalitis, and other infectious diseases, and houseflies spread food-borne illnesses. Flies can be annoyances especially in some parts of the world where they can occur in large numbers, buzzing and settling on the skin or eyes to bite or seek fluids. Larger flies such as tsetse flies and screwworms cause significant economic harm to cattle. Blowfly larvae, known as gentles, and other dipteran larvae, known more generally as maggots, are used as fishing bait and as food for carnivorous animals. They are also used in medicine in debridement to clean wounds.

Maggots: A maggot is the larva of a fly (order Diptera); it is applied in particular to the larvae of Brachycera flies, such as houseflies, cheese flies, and blowflies,[1] rather than larvae of the Nematocera, such as mosquitoes and Crane flies.